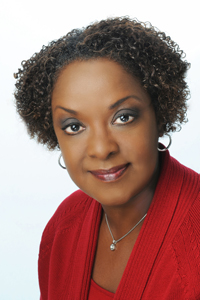 Angela Pace is the Director of Community Affairs for WBNS-10TV, serving as a liaison between WBNS and the Central Ohio non-profit community.  She was raised and schooled in Columbus (Capital University and Columbus City Schools), and has worked in central Ohio all her life.

Angela anchored the 6PM and 11PM editions of 10TV Eyewitness News for 13 years, beginning her on-air duties in March of 1993.

She previously worked at WCMH-TV for 13 years.  For five of those years she anchored the weekday 6pm, 7pm and 11pm newscasts.  During her career at WCMH-TV, she worked first as a floor director and later as a reporter.  Angela also worked at WCLT Radio in Newark, where she was a news director and reporter.

Angela currently serves on the boards of the Lincoln Theater Association and the Columbus Association for the Performing Arts. Her past board involvement includes:  Capital University trustees; Capital University Alumni Association; Mid-Ohio Food Bank; Jazz Arts Group; the Greater Columbus Arts Council, Nationwide Children’s Hospital Foundation; and I Know I Can.   Her work with the United Negro College Fund included hosting their annual telethon from 1987 to 1991 and serving as grand marshal for their walk-a-thon for four years.

Among her awards and honors: 1992 Columbus Public School Hall of Fame; 1994 YWCA Women of Achievement Award; 1992 Governor’s Award for Journalism and Community Service; Columbus Education Association’s Martin Luther King Junior Humanitarian Award; the Capital University Outstanding Alumni Award;   1996 Toastmaster’s International Leadership Award; 2006 Community Service Award from the Columbus Urban League; Lifetime Achievement Award from the Columbus Association of Black Journalists; 2006 Music Educators Lifetime Achievement Award from the Columbus Symphony Orchestra;   In 2011, the Angela was inducted into the NATAS Ohio Valley Silver Circle for broadcasters with more than 25 years in the industry. The Columbus Bar Association has established a foundation in her name.  A large portion of the funds from that foundation was used to help build the Center for Child and Family Advocacy at Nationwide Children’s Hospital, where the Welcome Room has been named in her honor.  Angela has won five Emmys and a regional Telly award.  In January 2012, Angela Pace was named one of the Top 50 Icons in Columbus by the Columbus Bicentennial Guide.  Angela’s image is featured on the Long Street Cultural Wall of Fame.